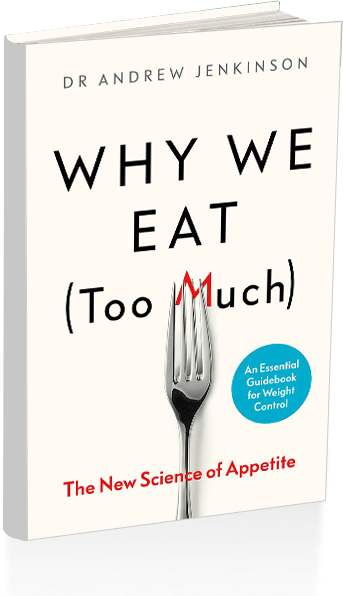 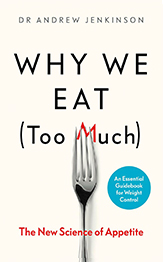 sample pages
Why We Eat (Too Much)

As obesity tightens its grip on our population, more and more of us are turning to fad diets and gyms to control our waistlines… very often without success. If weight loss by dieting, exercise and calorie counting were so simple why are we getting fatter and fatter, and sicker and sicker? Why are so many of us failing?

What’s In the Book

Why We Eat (Too Much)The New Science of Appetite

Ever struggled with diets and wondered why doctors don’t understand you?

Bariatric surgeon Andrew Jenkinson takes his patients own experiences of failed weight loss, mixes them with emerging science and leads you on a rollercoaster ride through metabolism, evolution, tasty food and suspect research to finally unlock the secrets to beating obesity.

Why We Eat (Too Much) is written to empower the reader to understand weight regulation. It takes the perspective of the failed dieter and explains, using ground breaking research, evolutionary medicine, anthropology, epigenetics, the history of food, and a large dose of common sense, just why they ended up trapped. The book, though fully scientifically referenced, is fast moving, light hearted and full of surprising facts and stories. It was conceived to be the ‘Freakonomics’ of Metabolism. 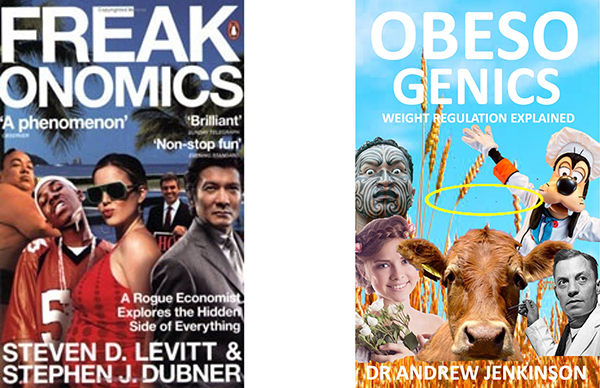 Original name for the book was ‘OBESOGENICS ’. The original cover designed to mimic ‘Freakonomics’ – featuring characters in the book Ancel Keys, The Sacred Cow, The Victorian Girl, Pacific Islanders and Goofy!

The chapters, piece together the hidden gems of metabolism and weight loss, that have been buried in rarely seen research. Moving through places (from Africa, to Dubai, to the Pacific, to Disneyworld…) and time (from the primordial sea, through the hunter-gatherers, to the Victorians, and the Caribbean sugar plantations…) to reveal the secrets of the obesity puzzle.

The premise of the book is that although most people eat too many calories, only some people become obese. It explains how changes in our modern environment can be misinterpreted by the body as signs of an impending famine or a harsh winter. The natural response to this is weight gain. These signals, which include excess omega-6, high insulin and high cortisol levels, when combined with previous low calorie dieting, cause intractable obesity. By eliminating these ‘famine’ signals we can take back control of our weight whilst enjoying healthy and tasty food.

In the first chapter “Metabology for Beginners’ we wonder why doctors know so little about obesity and weight loss when it affects a third of their patients? Starting with the shock of seeing their first cadaver in anatomy class, the story begins by describes how fat is the first thing medical students dissect away and discarded into the incineration bin. Ignored like the whole science of weight regulation. But, little do they know that hidden within those fat cells is a complicated organ that guides our appetite and energy use.

From the starvation experiments of conscientious objectors in Minnesota during the war, to overeating studies on prisoners in Vermont we start to understand that weight loss and weight gain don’t seem to follow the conventional, energy in - energy out, rules that are ingrained in our understanding of obesity. Why do people not lose as much or gain as much weight as expected. Why does the body try and hold on to its own desired weight?

By comparing the bodies exquisitely accurate regulation of water content (using thirst to take water in and urine to excrete it) to energy regulation (using appetite to take in and metabolism to use up) we wonder why such an important mechanism doesn’t seem to work - why is too much energy stored as fat in some people? Or, we speculate, maybe it’s not broken - is the body deliberately storing more energy in response to environmental signals. Signals that a long hard winter, or a severe famine are coming?

This theory is the basis of the book - Is obesity a sign of sustained preparation for a famine? Are hibernation signals triggering weight gain? Similar signals that trigger weight gain in many animals?

In ‘The Sacred Cow’ we learn why a free roaming Indian cow, well-fed and well cared for, is only half the size of the cows in the drizzly green fields of England. The explanation of how farmers can grow a herd to be bigger and fatter than their rivals herd by changing the type of feed and by using selective breeding techniques is then mischievously applied to human populations - with the same outcome. We visit a food court in Dubai and wonder why the local Emiratis are so much bigger than the other tribes eating the same food. We look at the Pacific Islanders and speculate how their marathon ocean migrations may have selected for those with fat genes. We see what happens to identical twins when they are adopted and raised in different environments - is their eventual size effected by their genes… or their environment?

‘The Biggest Losers’ takes a look at what happens to contestants from the extreme weight loss TV shows in the long term. Why do they have metabolisms that are 600kcal/day less than their former selves… even when they have regained all their weight? Why can two similar looking people have metabolisms that differ by the equivalent of a 10k run or a Big-Mac meal deal - every day? The observations seem to fit in with our theory that the body is on control of weight regulation and you can’t beat it by dieting - in fact you are encouraging even more weight gain, the calorie restriction giving distressing famine type stress signals

‘The Glutton’ describes what it is like to suffer from end-stage obesity. Why are severely obese people constantly hungry and tired? The chapter explains how, under normal circumstances, our gas-tank (the amount of fat we are carrying) is recognised by our brains.  If we are carrying enough fat we will automatically eat less. Imagine what happens if the petrol gauge in our car is faulty and shows no gas when the tank is actually full? We stop at the nearest petrol station. In the same way, in leptin resistance, (the condition explaining run-away obesity), the message that too much fat is on board is not getting through, the result - constant ravenous hunger.

“The Master Chef’ take us on a journey through time. Explaining how humans could not have evolved a bigger brain, could never have become who we now are, without first using fire, and the cooking of food to our metabolic advantage. Food and cooking defines us as humans and once we grasp this then the story of our relationship with food - from the beginning of agriculture, to local markets, food merchants, the sugar story, and finally the industrialisation of food - seems like a natural progression. “The Fat Scientist’ explains why we have been told that natural saturated fats are bad for our health and unpicks the floored research into the diet-heart hypothesis - explaining away the so-called paradoxes of the French, the Maasai and the Inuit Eskimos, who all have high fat diets and low rates of obesity and heart disease.

‘The Omega Code’ compares the ancient diseases; beriberi and scurvy - diseases misunderstood for hundreds of years, and speculates whether a current deficiency could be a cause of obesity. Looking at the change in the food we eat, caused by the cholesterol scare - increased oils, grains and processed foods, it examines the effect these have on our levels of essential fats. The chapter describes how western populations have profound derangements of their omega-3:6 ratios. How the high omega-6 in western foods mimics the Autumn food that triggers pre-winter weight gain in many animals.

‘The Miracle Diet Book’ starts with a mischievous tip on how to make money by writing a diet book that will become briefly popular but will then be discarded, as dieters regain their weight… and then gain even more.

‘The Fat of the Land”, uses observations and examples from real patients in clinic to outline the times in life when weight gain is often triggered (leaving home, going to college, getting married, doing night shift and moving to a new country) and explains, in each case, why weight gain occurs.

Part Three of Why We Eat (Too Much) takes the reader through a simple stepped program to reset their weight to a healthier level, reinforcing the main themes of the book - why some people struggle and some are immune to obesity, how diets are counter-productive, the metabolic dangers of grains and vegetable oils, the detrimental effect of insulin on weight, how natural saturated fats are good for you and should not be avoided, cortisol / stress and weight gain and the importance of muscle health (but not going crazy in the gym). All these factors - when truly understood will mean that the reader will never have to go on another ‘miracle diet’ again. 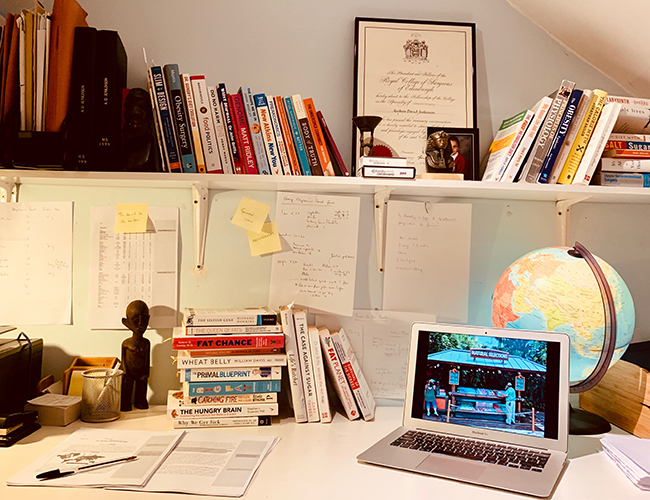 Why We Eat (Too Much) HQ 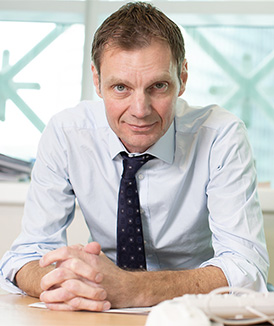 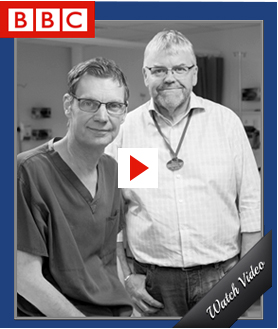